Are you passionate about outdoor activities or just want to venture out to discover the wonders of the green heart of the Marche?
We propose an itinerary that crosses the gorges and medieval villages with a fairytale flavor with art treasures to visit and culinary specialties to taste.

This tour is perfect in all seasons and is suitable for young and “less young” people. Are you ready to GO?

The Regional Natural Park of the Gola della Rossa and Frasassi is an oasis of nature that offers the opportunity to practice many sports in the open area.

From hiking with 35 marked trails, mountain-biking, horseback riding, caving, canoeing and rafting on the Sentino river, to climbing. On the vertical limestone walls of the Gorges and the main mountain ranges, many rock routes have been opened over the years, both in the style of classic mountaineering and modern sport climbing. Some areas are considered “gyms”, frequented for training and exercise. One of the most spectacular disciplines is the highline that consists of walking in balance on a sling stretched tens of meters from the ground with the beautiful throat in the background. In this magnificent area, every september, the Frasassi Climbing Festival takes place, with climbing and outdoor activities among the beautiful cliffs around Frasassi. 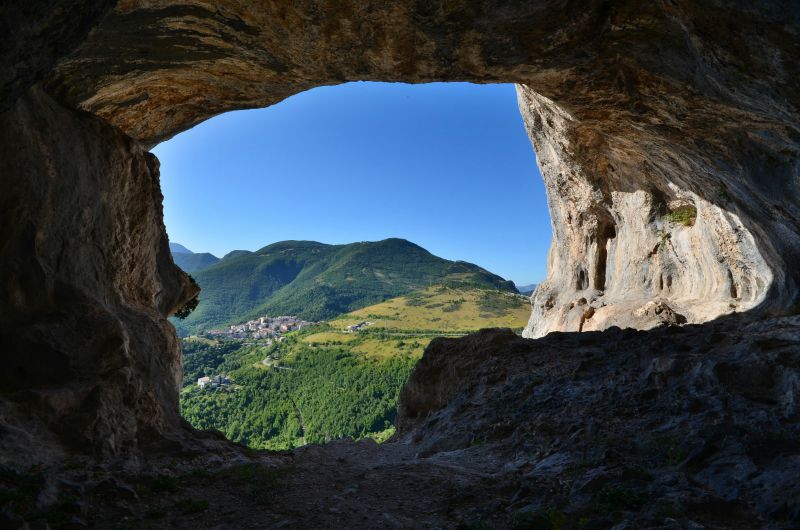 The small town of San Vittore delle Chiuse rises around the 11th century abbey, built between an amphitheater of mountains that is an exceptional example of Romanesque architecture in central Italy.

In the village you can enjoy spas and restaurants, in total harmony with the surrounding nature.

The gem?
Parco Frasassi Adventure on the river Sentino where you can live a wonderful day immersed in nature and have fun in total safety on the 5 adventure trails for adults and children. 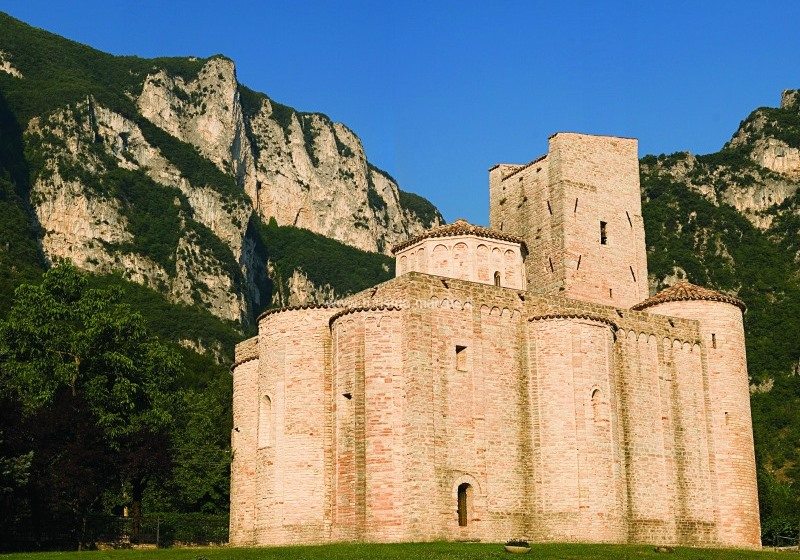 3. The Valadier’s Tempietto (little temple) and the Hermitage of Santa Maria Infra Saxa

On the road to the caves of Frasassi, inside a wonderful cave that overlooks the breathtaking view of the Gorge, there are the religious structures of the Hermitage of Santa Maria Infra Saxa and of the Valadier’s Tempietto that deserve a visit.
At the end of a 700m walk along an uphill path but paved and easily walkable (even with children and buggies), you find yourself in front of a jewel hidden in the bowels of the mountain: the small temple of Valadier, an octagonal church built in 1828 by Pope Leo XII, on the design of the Italian architect Giuseppe Valadier.

Behind the temple there is the simple stone building of the Hermitage of Santa Maria Infra Saxa, whose interior is partly carved into the living rock, once used as a cloistered convent for Benedictine nuns. 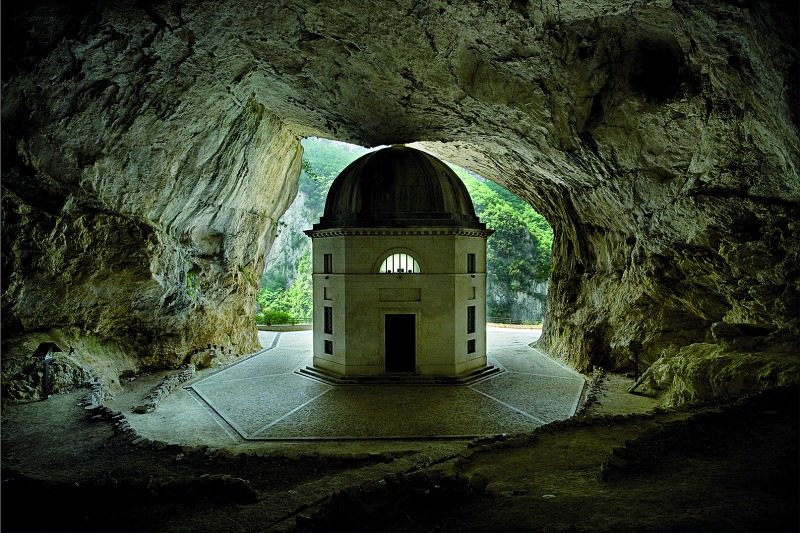 4. The Frasassi Caves: a fairy tale written with water

This wonderful underground complex, the largest in Europe and one of the most beautiful attractions in all of Italy, will offer you an incomparable spectacle of nature: a fantastic underground labyrinth made of stalactites, stalagmites and crystallized ponds.

Here you can take one-hour tourist routes or speleological routes of different difficulty. If you are passionate about photography we recommend the brand new photographic 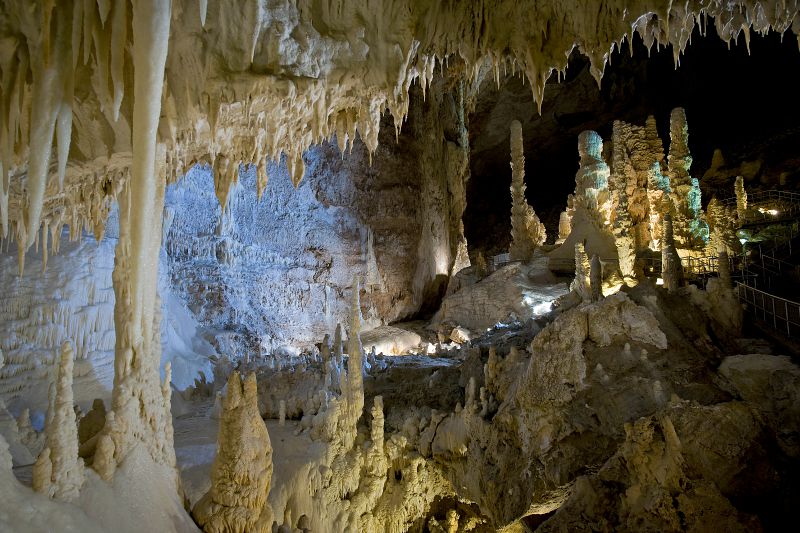 5. Fabriano: the city of paper

What makes this ancient city famous (which has been traced back to prehistoric times) throughout the world is certainly its map. Do not miss a visit to the Museum of Paper and Papermark where you can try to become at paper making, trying in the first person this difficult job. In Piazza del Comune the city’s history is concentrated with Il Palazzo del Podestà, the Loggiato di San Francesco and the Palazzo Comunale, which leads to the Teatro Gentile. All buildings look to the thirteenth-century Sturinalto fountain, of exceptional charm. 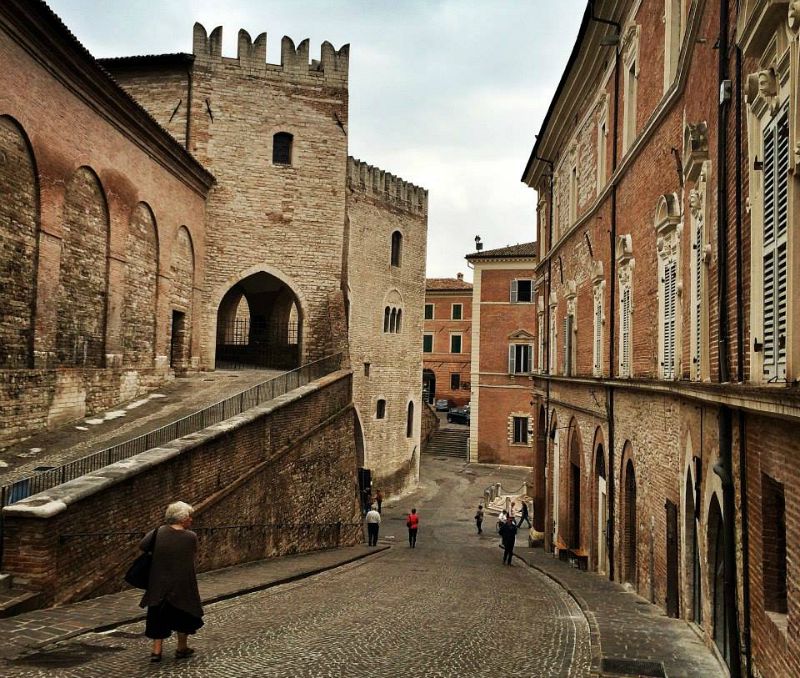 6. Sassoferrato: one of the “most beautiful small villages in Italy” and the ancient Roman city of Sentinum

Sassoferrato lives in an uncontaminated environment in the heart of the Umbria-Marche Apennines. In a dominant position you will find the symbol of the city: the Albornoz Fortress (Rocca), massive military construction built in 1365, from whose surrounding park you can admire a large and impressive panorama. 2 km from the center are the ruins of the ancient Roman city of Sentinum, with walls, cobblestone streets, some mosaic floors, the remains of the baths and granite columns. Sassoferrato also boasts a rich and prestigious heritage in the field of historical and artistic heritage, as well as churches, monasteries, buildings of architectural interest. 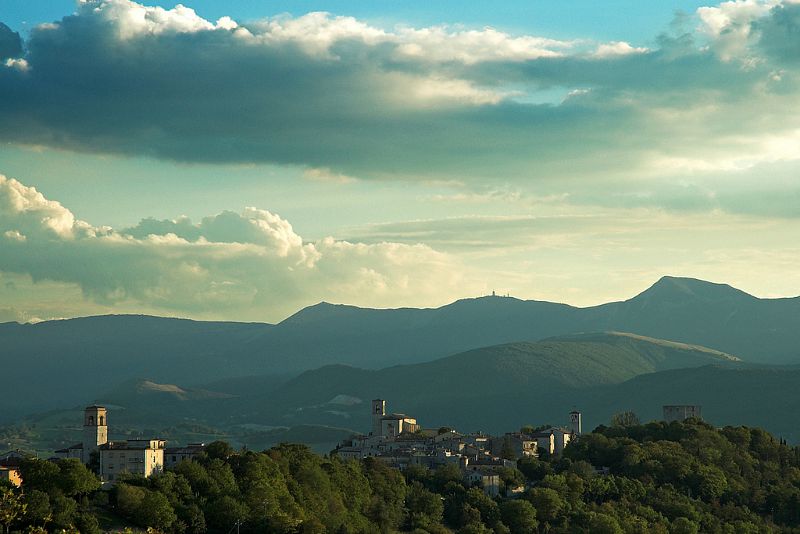 7. Serra San Quirico and its “Copertelle”

In this ancient village, with the shape of an immense ship made of stone and bricks immersed in an immense sea of green, you will go back in time. The visit to the town is really pleasant: the historic center is perfectly preserved and particularly impressive are the Copertelle: the passages covered along the walls of the town, illuminated by large openings with arches where in times of war soldiers passed while during peace carried out the open markets. Here you will find romantic and suggestive views. 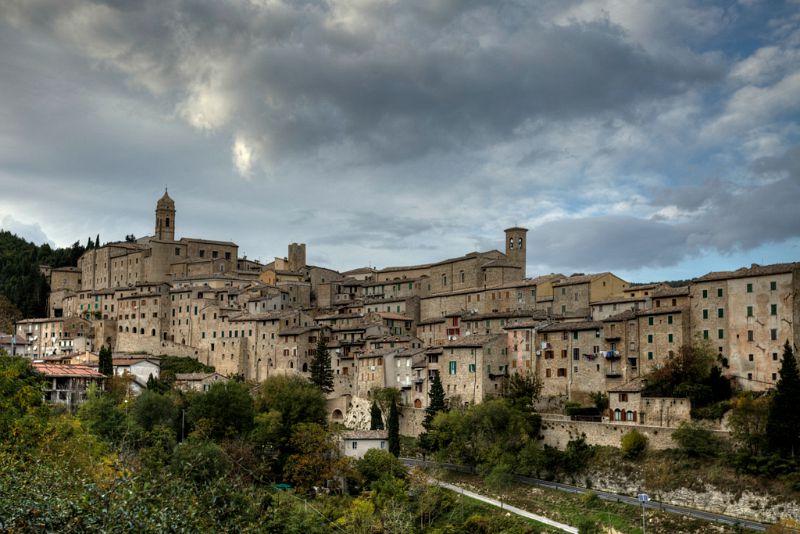 8. Arcevia and its castles

“The Senoni Gauls founded me and called me Arcevia” so reports a notary deed of 1207. The fortified place of Arcevia, theater of bloody battles between Guelphs and Ghibellines and between the Malatesta and Montefeltro is today the “Pearl of the Mountains” that will offer you a broad view of the Valle del Misa. The gem of Arcevia? Around the town are grouped 9 medieval fortresses that will make you relive the ancient atmosphere of the past and deserve a nice tour: Avacelli, Castiglioni, Piticchio, Montale, Nidastore, Loretello, San Pietro in Musio, Palazzo and Caudino. 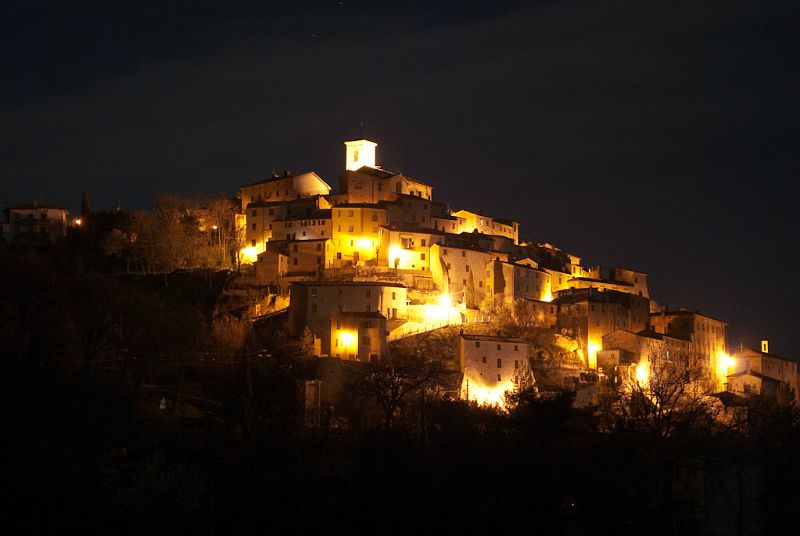 9. The Castle of Genga

The village of Genga, an “orange flag” village in the Marche region, is a small castle built in the Middle Ages, enclosed by thick woods, on the top of a hill in the upper Esino valley.

Once you enter the village by the only arched door, let yourself be enchanted by the small streets, the beautiful church, the ancient noble palace of the Counts of Genga.
Worth a visit: the panoramic viewpoint over the valley full of colors in a wide embrace between heaven and earth and the painted terracotta “Madonna of Misericordia” , by Pietro Paolo Agabiti inside the Genga Museum. 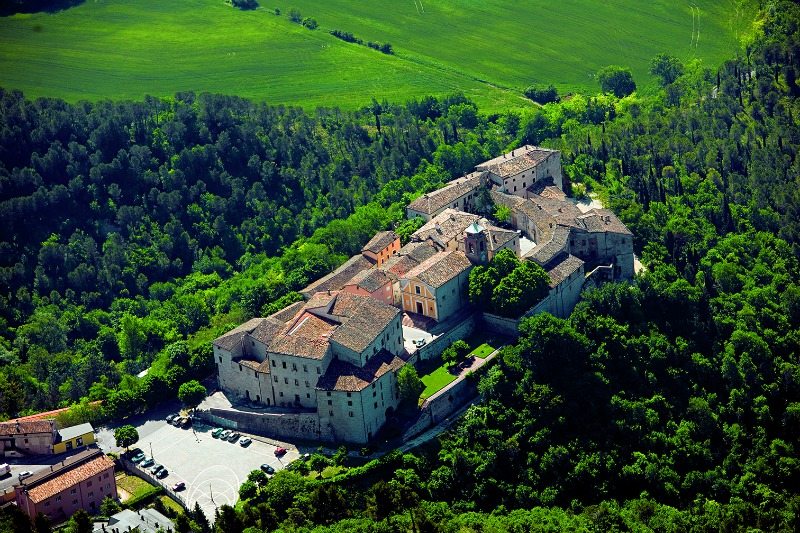 There are many legends on the mountains that form the backdrop to the Frasassi Caves. One of these tells of a sad love, finished tragically, that has united two young lovers until death: Piero and Sara who give the name to this small village with ancient walls. Immerse yourself in a timeless atmosphere retracing the narrow streets of the castle and enjoy the splendid view that, from the top of the hill, opens the eyes to glimpses of rare beauty.

The two city walls, with their doors, and the superb Longobard tower, which had the double function of sighting and defense, are still well preserved. 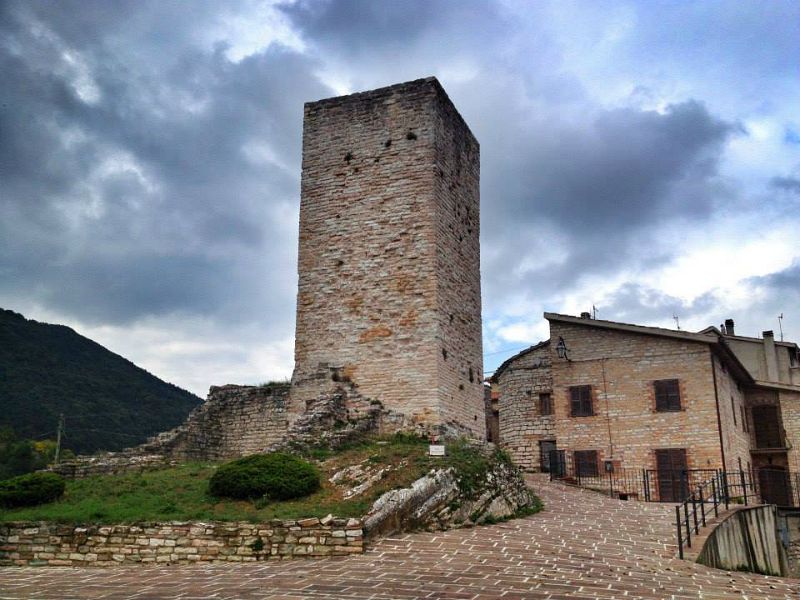 You can not go home without tasting the delicacies of the area. The prince of the typical productions is the Verdicchio Wine in its variants: the Verdicchio dei Castelli di Jesi that can be tasted in the countless cellars of the Municipalities perched on the Esini Hills and the Verdicchio di Matelica. Moving to Fabriano you can taste with wine, the famous “Salame Fabriano” whose origins are lost in time. You can also taste excellent beef from the Marche region and a lean and tasty pork. Among the first courses, the traditional vincisgrassi deserve a particular tasting. Equally genuine are the oil, the excellent honey and the tasty cheeses. 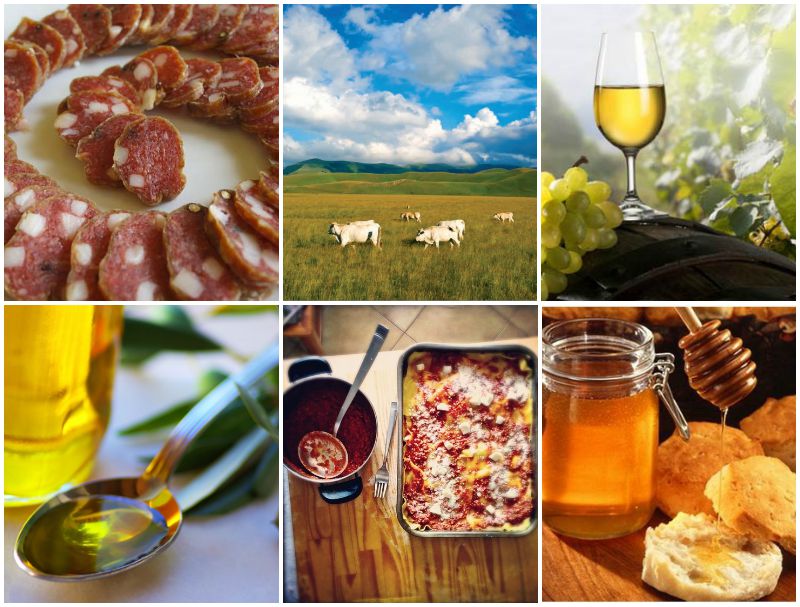 between #marche and #umbria